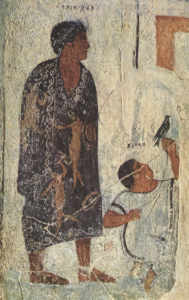 26-27.09.2019. “Figure-Decorated Textiles in Classical Etruscan Art”. Conference at the International Workshop on Textiles in Art in the Graeco-Roman World.

In Etruscan art, representations of textiles show numerous kinds of patterns. They often allows us to distinguish the material of which the textile was made. This conference focuses on representations of complex figural scenes on garments. The only example known until today is the figures on the mantle of Vel Sathies in the 4th century BC François Tomb in Vulci. It is an extraordinary case study regarding the complexity of the patterns and the visual program of the tomb in which it is inserted. Thus, the conference proposes answers to the following questions: what is the pattern of the Vel Saties’ mantle? what kind of mantle is it and what does it tell us about the Etruscan ritual practices? what social and symbolical status does the mantle indicate? and how can we understand this mantle in the entire decoration-program of the famous François Tomb in Vulci?